A Tradition of Excellence 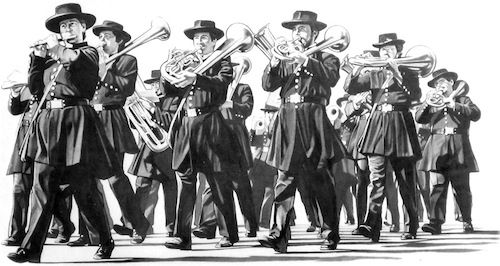 The band MAKES HISTORY LIVE by presenting period brass band music, performed on antique instruments. Attired in uniforms and gowns, the Band’s musicians, color guard, and costumed ladies take you back to the 1860’s; to that turbulent era known as the Civil War. A nostalgic portrayal of the atmosphere of days gone by is generated by a unique form of showmanship that blends the sights and sounds of the period with historical anecdotes.

More than eighty volunteers, men and women, make up the 1st Brigade Band. Widely varied in age and occupation, they come from many communities, bringing with them a common interest in their musical heritage. During a typical year, they will meet their audience more than forty times, in concerts, parades, military balls, and worship services, presenting their educational and entertaining programs. While the abundant written and pictorial materials remain, the mellow sounds of the brass bands of the 1860’s were lost until the 1st Brigade Band, starting in 1964, began to locate and restore the dented and broken instruments and to retrieve and reconstruct the yellowed and torn music. Through their work you can now hear what Presidents Lincoln and Davis, Generals Lee and Grant, and their contemporaries heard.

The 1st Brigade Band has recorded in the MAKING HISTORY LIVE series, the most complete anthology of Civil War Music ever attempted. High fidelity recordings of Union and Confederate band and vocal music are available at performances of the 1st Brigade Band, historic site gift shops, and on our website.

The 1st Brigade Band is an affiliate of the Wisconsin Historical Society and is supported and sponsored by Heritage Military Music Foundation, Inc.; a non-profit, educational, historical, and patriotic organization. In 2009, HMMF was awarded the Rueben Gold Thwaites Trophy for Local History; demonstrating the excellence of its achievements in both collecting and preserving history and sharing that history with the public.